The Company’s technology is exceptionally versatile, encompassing a broad range…

…of therapeutic targets and market opportunities. The therapeutic target classes are autoimmune diseases like diabetes, lupus, and arthritis, and multiple sclerosis, as well as, neurodegenerative diseases, which include Alzheimer’s, ALS, and Parkinson’s. Chronic inflammation is an exacerbating element in many diseases, and that ubiquitous role is perfectly demonstrated by the range of application for our technology. The fact that a singular approach, represented by our tolerogenic induction platform, can impact such seemingly different classes of disease as autoimmune and neurodegenerative implies that there is a pivotal connection between them. Inflammation, instigated by the immune system, characterizes and connects these two disease classes

The immune system forms a dynamic shield to protect us, but under certain conditions it can attack the very cells it is meant to protect. This can lead to a variety of autoimmune diseases. 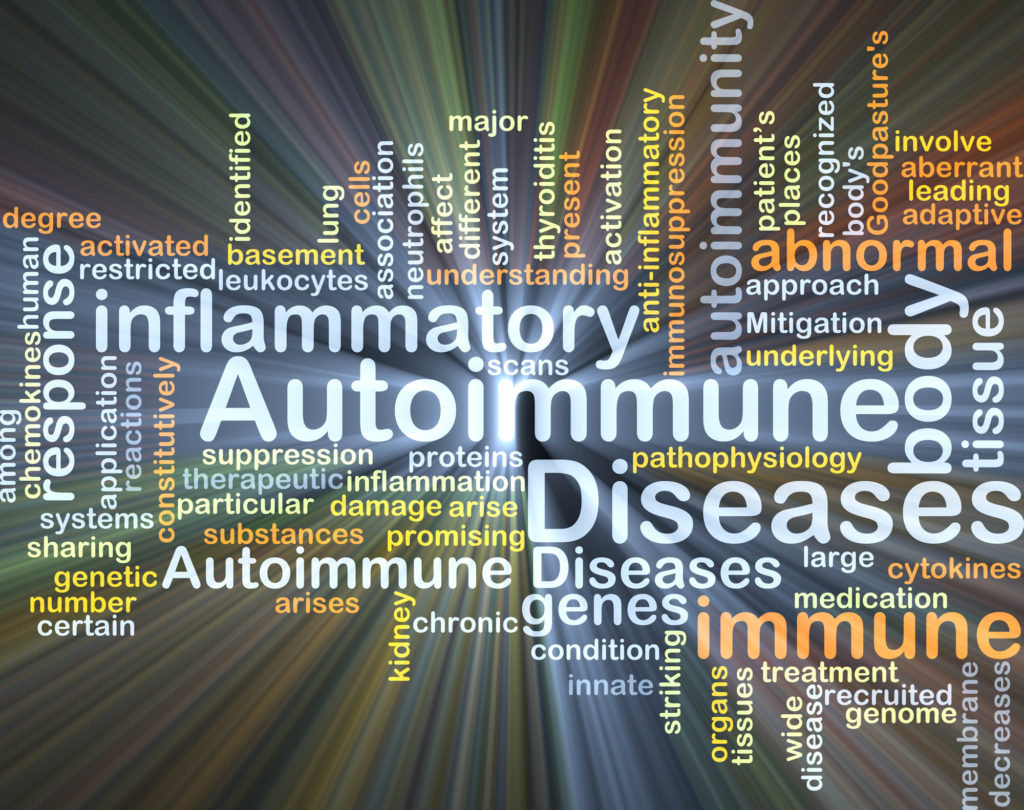 There are over a hundred known autoimmune diseases, and they affect every organ and organ system of the body. The world is a harsh environment in which to live, and without the immune system we would not be able to survive. The immune system recognizes and discriminates between safe and pathogenic antigens in the body and mounts an appropriate response to those antigens it deems to be unsafe. The mechanisms involved are complex, interactive, redundant, and normally highly effective. Even so, there are issues. People do get sick from pathogens that slip through the intense surveillance or overwhelm the immune system altogether. Conversely, the immune system can erroneously interpret a completely benign self-generated antigenic stimulant as dangerous, and then mount an attack upon that substance. When this occurs on a chronic basis, whereby a normal physiologic function is impaired, the result is autoimmune disease – literally an inflammatory immune response against self. Typically, the immune cells undergo an educational process to condition the cells for appropriate responses to stimuli, but in autoimmune disease this ability becomes compromised and the immune system turns on its own healthy tissues, destroying the fabric of its own existence. The results of this can be devastating. According to the American Autoimmune Related Diseases Association (AARDA) there are over 50 million Americans suffering with some kind of autoimmune disease. CLICK HERE (AARDA) for a list of autoimmune diseases.

Plaque Psoriasis is an inflammatory skin condition that is the most prevalent autoimmune disease in the United States. It affects approximately 7.5 million adults. It is a chronic, itchy and/or painful, disfiguring, and disabling disease for which there is no cure. Psoriasis is associated with an increased risk of early mortality, and an increased prevalence of co-morbidity such as psoriatic arthritis, cardiovascular disease, and diabetes. The physical, psychologic, social, and economic impact of psoriasis, plus the associated stigma, result in cumulative impairment over a patient’s lifetime.

Plaque Psoriasis has been chosen by TregTherapeutics management as the first disease state in which to demonstrate human proof of concept. Rationale for the selection of this particular autoimmune disease model is based on the lack of a cure, plentiful patient availability, the skin’s ease of access and treatment, as well as, the availability of definitive and well-recognized treatment assessment tools. A Phase 1/2a study protocol has been developed and a single study center has been designated in which the study will be conducted.

There is no cure for psoriasis and the approach to therapy is largely governed by the extent and severity of disease. Available treatments focus primarily on the use of anti-inflammatory or immunomodulatory agents to control the symptoms of the disease and prevent further relapses. The management of mild psoriasis usually consists of topical treatments (e.g., corticosteroids, calcipotriene, retinoids, salicylic acid, coal tar, dithranol, and emollients). Treatments for patients with moderate to severe psoriasis include phototherapy and systemic treatment with oral agents (methotrexate, cyclosporin, retinoids, fumaric acide esters [FAEs]) and, more recently, injectable biotechnology-derived monoclonal antibody products). However, many patients are not receiving the optimal therapy that is required to not only treat skin symptoms but also address the underlying inflammation and associated co-morbidity.

Multiple sclerosis is a chronic inflammatory disease that results in autoimmune demyelination of the human central nervous system (CNS). This produces a devastating impact for those afflicted with no curative treatment. In total, MS affects over 2.5 million people worldwide, including up to 1,000,000 cases in the US. MS is typed according to different flare-up patterns (exacerbations); these patterns are described as either remitting/recurring, progressive, or a combination of patterns called secondary progressive, remissions grow fewer and fewer until the disease in consistently progressive. Regardless of the type, it is an expensive disease to treat. Direct and indirect health care costs range from $8,500 to $54,000 per patient/year in the United States. 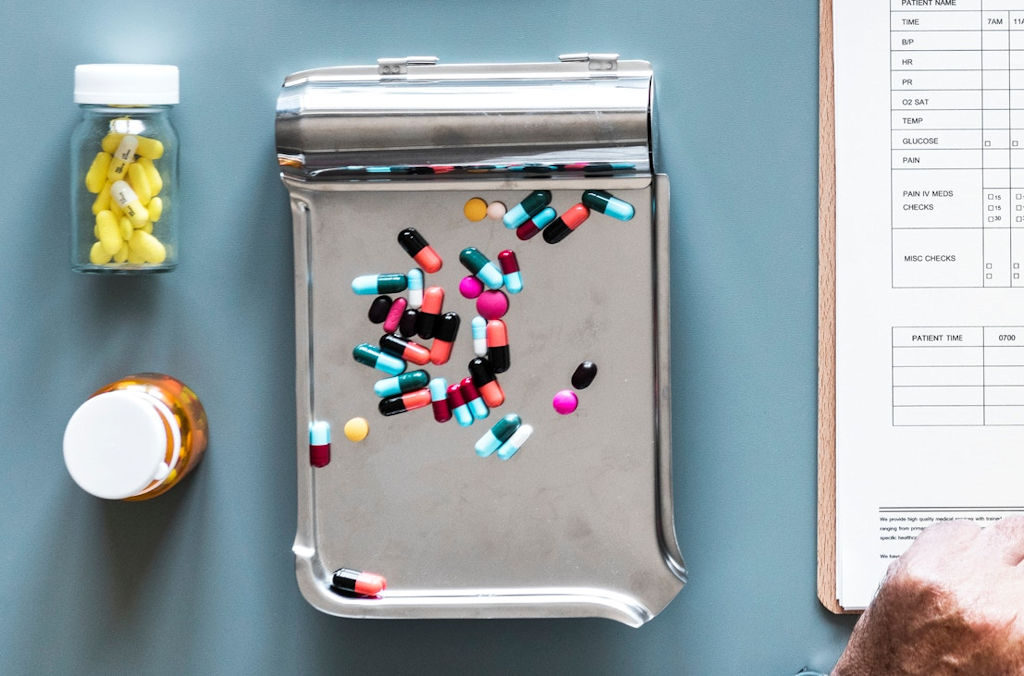 The traditional treatment for MS is to employ intravenous steroids during acute attacks. Steroids have not been shown to decrease the risk of future attacks or change the natural progression of the disease; however, they have been useful to hasten recovery from acute attacks. IFN-β, an anti-inflammatory cytokine, is another well-recognized treatment that has provided relief and reduction of symptoms. Today, there are many immunomodulation agents on the market that are used on an on-going basis to modify the course of the disease, that is, to slow down progression of the disease and to relieve chronic and acute symptoms. These therapeutic agents generally impair immune system function at some step along the way in order to provide relief, and they a can produce adverse effects due to broad immunological compromise. It is important to note that current therapies do not cure the disease, they provide only palliative attempts to alleviate symptoms and/or slow down progression.

Celiac disease is an autoimmune disorder that is triggered by consuming gluten, a protein found in wheat, barley and rye. When a person with celiac disease eats gluten, the protein interferes with the absorption of nutrients from food by damaging a part of the small intestine called villi. This interferes with the absorption of nutrients and results in intense abdominal discomfort. Currently, the only available treatment for a patient with celiac disease is a strict, gluten-free diet. Maintaining this lifestyle over a lifetime is challenging. There are over 3 million people in the US with this genetic autoimmune disease, and the vast majority of these remain undiagnosed. The disease can remain undetected in patients until triggered by stress or other environmental condition marking the onset of the disease.

Celiac disease is an ideal autoimmune disorder to study because it is relatively simple, when compared to other autoimmune diseases, insofar as its predictability and biomarkers is concerned. It is well-understood with common symptomology caused by a defined substance – gluten. For comparison, multiple sclerosis patients, depending on the particular pattern of disease that is manifest, may experience periods of spontaneous remission and unexplained exacerbation. There is no such fluctuation with celiac patients, where gluten challenge produces expected symptoms. There are no established set of biomarkers for MS, whereas in celiac disease, biomarkers are readily available.

Neurodegenerative Protein Aggregating Disorders and a Tolerogenic Approach to Amelioration. 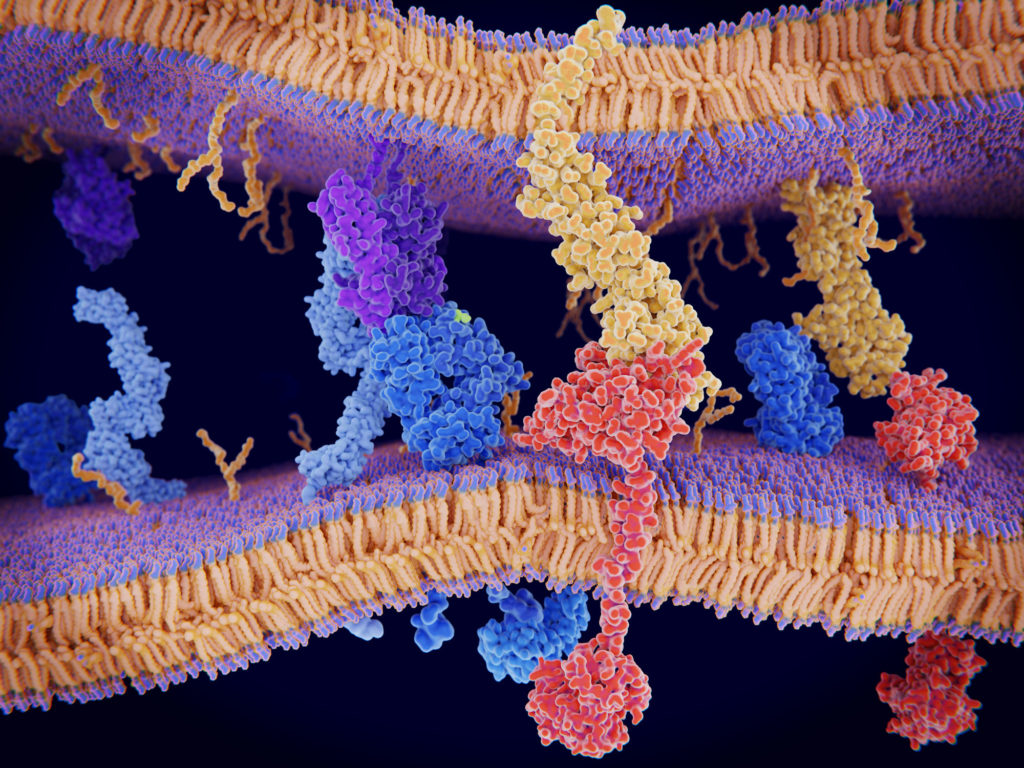 Inflammation is a common thread running through neurodegenerative diseases. The immune system mounts a highly inflammatory response to aggregated proteins that accumulate within neurological tissues. Normally the body gets rid of any aberrant, malformed, or mal-folded proteins through its intracellular and extracellular garbage disposal systems. The extracellular garbage disposal function is mainly accomplished throughout the body by the action of macrophages, and in the CNS, these macrophages are known as microglia. Among other functions, microglia are principally responsible for degradation and clearing of these proteins (assisted by astrocytes, a type of cell that augments and supports microglial function).

The various protein aggregation disorders are caused by various genetic and/or environmental factors, but all are characterized by a buildup of dysfunctional proteins. Protein manufacture is a vital function of all cells, including those in the CNS, but when problems occur that result in malformation or mis-folding, they must be removed so as not to interfere with normal neurologic function. In these diseases, however, these aberrant proteins accumulate and form bonds between themselves, resulting in aggregated clumps of proteinogenous garbage that is highly inflammatory. Inflammation overwhelms the garbage disposal system and renders it, essentially, dysfunctional.

The devastating neurological degeneration associated with diseases like Alzheimer’s, Parkinson’s, Huntington’s, and amyotrophic lateral sclerosis (ALS) progresses relentlessly over time as these aggregated proteins accumulate. The diseases differ in the type of protein that is produced and in the location within the CNS in which they are deposited; these characteristics determine the clinical symptomology and ultimately the determination of the particular disease.

The TregTherapeutics approach drives polarization and expansion of a Treg repertoire that has acquired specificity for the antigens derived from the aggregated proteins associated with a targeted neurodegenerative disease. These Tregs surveil the central nervous system (CNS), and upon recognition of CNS self-antigens, they inhibit inflammation that underlies neurodegeneration. The amelioration of neurodegenerative disease progression and symptoms is the expected outcome.

Tregs can play a critical role in the rejuvenation of microglial garbage disposal functionality by reducing inflammation. If inflammation is down-regulated via Treg cell signaling and the cytokines/chemokines they produce, then microglia can commence with normal garbage disposal activity that is critical to reduced symptomology and improved homeostasis.

ALS is a neurodegenerative disease that effects the motor neurons in the nervous system that control voluntary muscle movement. “Amyotrophic” refers to the atrophy and loss of control of muscles that enviably results those neural cells are affected by the disease. From loss of muscle control, to weakness and, eventual dysfunctionality, disability, and ultimately, death, the disease causes prolonged suffering and devastated lives in over 160,000 patients throughout the world.

ALS generally affects swallowing and speaking initially and progresses through various stages of muscle paralysis. ALS can also affect some degree of cognitive ability and/or behavioral aspects. Life expectancy for about 50% of patients is 3-5 years; 30% of patients live beyond 5 years, and between 10-20% of patients live over 10 years.

Medical intervention and technology has improved the quality of life for people with ALS by assisting with breathing, nutrition, mobility, and communication. There are currently four drugs approved by the U.S. FDA to treat ALS: Riluzole – influences glutamate activity and regulation in CNS, and can delay more serious breathing symptomology; Nuedexta – used for treatment of pseudobulbar affect (PBA), an uncontrollable emotional display characterized by episodes of crying, laughing, or other emotions; Radicava – an antioxidant used to reduce oxidative stress, thought to play a role in neuronal death; Tiglutik – a liquid form of Riluzole. Despite modest disease modification and symptom relief from these medications, the plight of the ALS patient remains serious and the prognosis grim.

TregTherapeutics is conduction preclinical animal studies to demonstrate the efficacy of its approach in reducing inflammation leading to amelioration of disease. A study protocol has been developed, a primary investigator has be designated, and resources are being gathered to commence a Phase 1/2a study in 2023.

The work in which the company is currently engaged is centered on humanization of a tolerogenic vaccine for multiple sclerosis. Specifically, formulation, human cell line in-vitro studies, and manufacturing are the current focal points in preparation for preliminary meetings with the FDA to review the regulatory plan. In addition, the company has submitted its request for orphan drug designation of primary progressive multiple sclerosis and will structure its regulatory plan accordingly.

After completing Investigational New Drug (IND) studies a Phase 1 clinical trial will be initiated, followed by Phase II clinical trials. It is the intention that a suitable biotech partner will be identified to move the MS project through latter stages of clinical trials.

The American Autoimmune Related Diseases Association (AARDA) is dedicated to the eradication of autoimmune diseases and the alleviation of suffering and the socioeconomic impact of autoimmunity through fostering and facilitating collaboration in the areas of education, public awareness, research, and patient services in an effective, ethical and efficient manner.

Would you like to take part in changing the world?
May we explain how?